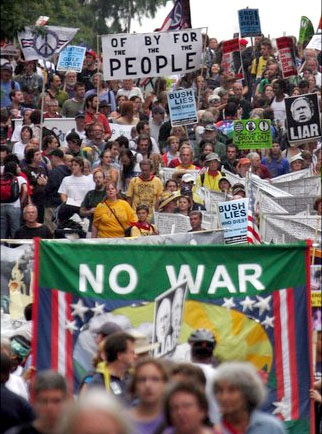 Thousands of protesters against the war in Iraq rallied today in Washington and other U.S. and European cities to demand the return of U.S. troops in what organizers hope will be the largest gathering since the war began more than two years ago.

Protest organizers estimated a crowd of about 200,000 rallied at the Ellipse, then marched around the White House and along Pennsylvania Avenue. Police downgraded the count to about 150,000. The crowd thinned when a misty drizzle began before the afternoon concert on the Washington Monument grounds.

D.C. police and U.S. Park Police said there were no significant problems during the demonstrations and reported three arrests — one for destruction of property, one for attempted theft, and one for disorderly conduct. Police said all three incidents stemmed from the tearing-down of a construction fence and the destruction of a newspaper box in the 1000 block of 11th Street NW. Police said that some windows were broken at 13th Street, just south of L Street.

The antiwar activities occurred on the same weekend as the fall meetings of the International Monetary Fund and World Bank, which drew several hundred activists who criticized the organization’s policies as detrimental to the world’s poor.

Protesters came from around the country to the nation’s capital, arriving on buses, planes and in cars, carrying signs that read “Bush Lied, Thousands Died,” and “End the Occupation,” among other messages.

“We believe we are at a tipping point whereby the anti-war sentiment has now become the majority sentiment,” said Brian Becker, national coordinator for ANSWER, one of the main antiwar groups coordinating today’s events.

Cindy Sheehan, the California mother who drew thousands of demonstrators to her 26-day vigil outside Bush’s Texas ranch last month, won a roar of approval when she took the stage before the march. Her 24-year-old son, Casey, was killed in Iraq last year.

“Shame on you,” Sheehan admonished, directing that portion of her remarks to members of Congress who backed Bush on the war. “How many more of other people’s children are you willing to sacrifice?

She led the crowd in chanting, “Not one more.”

President Bush was not around to hear the protesters, assembled just blocks from the White House, although his wife, Laura, was at home hosting authors for a long-planned literary festival on the Mall. Bush had flown out of town on Friday to assess Hurricane Rita recovery efforts. Vice President Cheney was undergoing surgery at George Washington University Hospital to repair aneurysms on the back of his knees.

In a hitch for some coming to the protest, 13 Amtrak trains running between New York and Washington were delayed for up to three hours Saturday morning for repair of overhead electrical lines. Protest organizers said that held up thousands coming to the rally.

Organizers delayed the start of the march, originally planned to begin at 12:30 p.m., to wait for protesters arriving on the Amtrak trains. There were other reports of Metro delays in northern Virginia on the Blue and Yellow lines.

A crowd in London, estimated by police at 10,000, marched in support of withdrawing British troops from Iraq. Violent clashes between insurgents and British troops in the southern Iraq city of Basra in recent days highlighted the need to get out, protesters said.

“Enough is enough,” said Lindsey German, an official of the Stop the War Coalition, which organized the London march. “It is now time, once again, for the British people to step forward into the streets and insist that this time we will not be ignored.”

Gary Qualls, 48, of Temple, Tex., whose Marine reservist son, Louis, died last year in the insurgent stronghold of Fallujah, spoke at a rally near the U.S. Navy Memorial in support of continued U.S. involvement.

“If you bring them home now, who’s going to be responsible for all the atrocities that are fixing to happen over there?” he asked. “Cindy Sheehan?

Also at the rally, put on by Protest Warrior and other groups supporting Bush’s policy, demonstrators denounced Sheehan as a mother exploiting her son’s death.

“If I were to die in Iraq, I wouldn’t want my parents to be like Cindy Sheehan,” said Army National Guard Spc. Julie McManus, 20, of Drexel Hill, Pa., who was among more than 100 people holding signs. “I’d be ashamed of them.”

McManus said she drove to Washington with her boyfriend; she wore a white tank top with the words “American Soldier” in black marker.

Protesters were not the only visitors to the city this weekend. As fate would have it, organizers of the National Book Festival found themselves sharing the Mall with antiwar protesters. They stationed volunteers in green t-shirts at the top of the escalators at the Smithsonian metro station so that the thousands arriving would know which event was which.

That posed a problem for Martin Freed and his wife, Ruta Vaskys, from Fairbanks, Alaska, who are book lovers and antiwar protesters. In route to the rally, they stopped at the “Pavilion of States” tent to check out authors at the Alaska table.

Freed carried a protest sign. On one side it read, “Alaskans Against War.” On the other side, it read “The War is 100 percent Bush-[expletive].”

He was immediately surrounded by the book lovers group, including a security guard.

Vaskys resisted leaving. “The war is a lot more offensive than the sign,” she said. But the couple eventually left, with Freed calling over his shoulder: “This is the state the country has come to — you can’t even have free speech at a book festival. In the early afternoon, a convoy of about 200 motorcyclists made a full lap around the outer loop of the Beltway to show support for troops in Iraq and Afghanistan.

The ride, first organized in April by John “Big John” Oppido of Marbury, Md., was not politically motivated or planned to coincide with the protest. The event raised more than $17,000 dollars in donations, registration fees, and t-shirt sales to purchase care packages filled with international phone cards, disposable cameras and other supplies through Operation USO Care Package. Some 12 motorcycle clubs took part, some traveling from as far as Florida and Texas, Oppido said.

Earlier, at Freedom Plaza, near 13th Street and Pennsylvania Avenue in downtown Washington, dozens of charter buses were disgorging protests, among them Sister Maureen Metty, 66.

Metty stepped off a bus from Kalamazoo, Mich., at 8 a.m., arriving for what she said was her first-ever political rally. She carried a sitting stool, a backpack loaded with snacks, a toothbrush and toothpaste and a message from her fellow nuns — a sign that said “Sisters of St. Joseph’s for Peace.”

A bus from Lancaster, Pa., brought an eclectic crowd — gray-haired men in shorts and black socks, grannies with needle-point purses and a young man with facial piercings and aqua hair. Ginny DiIlio, who is in her late 50s, wore a red-white-and-blue shirt that said “Patriots for Peace.”

DiIlio was with her husband, George, who said he was new to the protest scene. “She corrupted me,” he said.

Sep. 24, 2005 – Crowds opposed to the war in Iraq surged past the White House on Saturday, shouting “Peace now” in the largest anti-war protest in the nation’s capital since the U.S. invasion.

The rally stretched through the day and into the night, a marathon of music, speechmaking and dissent on the National Mall. Police Chief Charles H. Ramsey, noting that organizers had hoped to draw 100,000 people, said, “I think they probably hit that.”

Speakers from the stage attacked President Bush’s policies head on, but he was not at the White House to hear it. He spent the day in Colorado and Texas, monitoring hurricane recovery.

In the crowd: young activists, nuns whose anti-war activism dates to Vietnam, parents mourning their children in uniform lost in Iraq, and uncountable families motivated for the first time to protest.

Connie McCroskey, 58, came from Des Moines, Iowa, with two of her daughters, both in their 20s, for the family’s first demonstration. McCroskey, whose father fought in World War II, said she never would have dared protest during the Vietnam War.

“Today, I had some courage,” she said.

While united against the war, political beliefs varied. Paul Rutherford, 60, of Vandalia, Mich., said he is a Republican who supported Bush in the last election and still does except for the war.

“President Bush needs to admit he made a mistake in the war and bring the troops home, and let’s move on,” Rutherford said. His wife, Judy, 58, called the removal of Saddam Hussein “a noble mission” but said U.S. troops should have left when claims that Iraq possessed weapons of mass destruction proved unfounded.

“We found that there were none and yet we still stay there and innocent people are dying daily,” she said.

“Bush Lied, Thousands Died,” said one sign. “End the Occupation,” said another. More than 1,900 members of the U.S. armed forces have died since the beginning of the war in March 2003.

In Washington, a few hundred people in a counter demonstration in support of Bush’s Iraq policy lined the protest route near the FBI building. The two groups shouted at each other, a police line keeping them apart. Organizers of a pro-military rally Sunday hoped for 10,000 people.

Ramsey said the day’s protest unfolded peacefully under the heavy police presence. “They’re vocal but not violent,” he said.

Arthur Pollock, 47, of Cecil County, Md., said he was against the war from the beginning. He wants the soldiers out, but not all at once.

“They’ve got to leave slowly,” said Pollock, attending his first protest. “It will be utter chaos in that country if we pull them out all at once.”

Folk singer Joan Baez marched with the protesters and later serenaded them at a concert at the foot of the Washington Monument. An icon of the 1960s Vietnam War protests, she said Iraq is already a mess and the troops need to come home immediately. “There is chaos. There’s bloodshed. There’s carnage.”

The protest in the capital showcased a series of demonstrations in foreign and other U.S. cities. A crowd in London, estimated by police at 10,000, marched in support of withdrawing British troops from Iraq. Highlighting the need to get out, protesters said, were violent clashes between insurgents and British troops in the southern Iraq city of Basra.

In Rome, dozens of protesters held up banners and peace flags outside the U.S. Embassy and covered a sidewalk with messages and flowers in honor of those killed in Iraq.

Cindy Sheehan, the California mother who drew thousands of demonstrators to her 26-day vigil outside Bush’s Texas ranch last month, won a roar of approval when she took the stage in Washington. Her 24-year-old son, Casey, was killed in Iraq last year.

“Shame on you,” Sheehan admonished, directing that portion of her remarks to members of Congress who backed Bush on the war. “How many more of other people’s children are you willing to sacrifice?

She led the crowd in chanting, “Not one more.”

Separately, hundreds of opponents of the World Bank and International Monetary Fund danced to the beat of drums in the Dupont Circle part of the city before marching toward the White House to join the anti-war protesters.

Supporters of Bush’s policy in Iraq assembled in smaller numbers to get their voice heard in the day’s anti-war din. About 150 of them rallied at the U.S. Navy Memorial.

Gary Qualls, 48, of Temple, Texas, whose Marine reservist son, Louis, died last year in the insurgent stronghold of Fallujah, asked: “If you bring them home now, who’s going to be responsible for all the atrocities that are fixing to happen over there? Cindy Sheehan?”