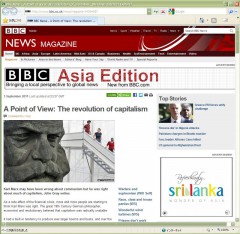 BBC News – A Point of View: The revolution of capitalism

A point of view はBBCのRadio4で毎週金曜日に放送される番組。ジョン・グレイは、政治哲学者で『誤った夜明け。グローバル資本主義の誤解』という本の著者とのことです。

A Point of View: The revolution of capitalism

Karl Marx may have been wrong about communism but he was right about much of capitalism, John Gray writes.

As a side-effect of the financial crisis, more and more people are starting to think Karl Marx was right. The great 19th Century German philosopher, economist and revolutionary believed that capitalism was radically unstable.

It had a built-in tendency to produce ever larger booms and busts, and over the longer term it was bound to destroy itself.

Marx welcomed capitalism’s self-destruction. He was confident that a popular revolution would occur and bring a communist system into being that would be more productive and far more humane.

Marx was wrong about communism. Where he was prophetically right was in his grasp of the revolution of capitalism. It’s not just capitalism’s endemic instability that he understood, though in this regard he was far more perceptive than most economists in his day and ours.

More profoundly, Marx understood how capitalism destroys its own social base – the middle-class way of life. The Marxist terminology of bourgeois and proletarian has an archaic ring.

But when he argued that capitalism would plunge the middle classes into something like the precarious existence of the hard-pressed workers of his time, Marx anticipated a change in the way we live that we’re only now struggling to cope with.

He viewed capitalism as the most revolutionary economic system in history, and there can be no doubt that it differs radically from those of previous times.

Hunter-gatherers persisted in their way of life for thousands of years, slave cultures for almost as long and feudal societies for many centuries. In contrast, capitalism transforms everything it touches.

It’s not just brands that are constantly changing. Companies and industries are created and destroyed in an incessant stream of innovation, while human relationships are dissolved and reinvented in novel forms.

Capitalism has been described as a process of creative destruction, and no-one can deny that it has been prodigiously productive. Practically anyone who is alive in Britain today has a higher real income than they would have had if capitalism had never existed.

The trouble is that among the things that have been destroyed in the process is the way of life on which capitalism in the past depended.

Defenders of capitalism argue that it offers to everyone the benefits that in Marx’s time were enjoyed only by the bourgeoisie, the settled middle class that owned capital and had a reasonable level of security and freedom in their lives.

In 19th Century capitalism most people had nothing. They lived by selling their labour and when markets turned down they faced hard times. But as capitalism evolves, its defenders say, an increasing number of people will be able to benefit from it.

Fulfilling careers will no longer be the prerogative of a few. No more will people struggle from month to month to live on an insecure wage. Protected by savings, a house they own and a decent pension, they will be able to plan their lives without fear. With the growth of democracy and the spread of wealth, no-one need be shut out from the bourgeois life. Everybody can be middle class.

In fact, in Britain, the US and many other developed countries over the past 20 or 30 years, the opposite has been happening. Job security doesn’t exist, the trades and professions of the past have largely gone and life-long careers are barely memories.

If people have any wealth it’s in their houses, but house prices don’t always increase. When credit is tight as it is now, they can be stagnant for years. A dwindling minority can count on a pension on which they could comfortably live, and not many have significant savings.

More and more people live from day to day, with little idea of what the future may bring. Middle-class people used to think their lives unfolded in an orderly progression. But it’s no longer possible to look at life as a succession of stages in which each is a step up from the last.

In the process of creative destruction the ladder has been kicked away and for increasing numbers of people a middle-class existence is no longer even an aspiration.

As capitalism has advanced it has returned most people to a new version of the precarious existence of Marx’s proles. Our incomes are far higher and in some degree we’re cushioned against shocks by what remains of the post-war welfare state.

But we have very little effective control over the course of our lives, and the uncertainty in which we must live is being worsened by policies devised to deal with the financial crisis. Zero interest rates alongside rising prices means you’re getting a negative return on your money and over time your capital is being eroded.

The situation of many younger people is even worse. In order to acquire the skills you need, you’ll have to go into debt. Since at some point you’ll have to retrain you should try to save, but if you’re indebted from the start that’s the last thing you’ll be able to do. Whatever their age, the prospect facing most people today is a lifetime of insecurity.

At the same time as it has stripped people of the security of bourgeois life, capitalism has made the type of person that lived the bourgeois life obsolete. In the 1980s there was much talk of Victorian values, and promoters of the free market used to argue that it would bring us back to the wholesome virtues of the past.

For many, women and the poor for example, these Victorian values could be pretty stultifying in their effects. But the larger fact is that the free market works to undermine the virtues that maintain the bourgeois life.

When savings are melting away being thrifty can be the road to ruin. It’s the person who borrows heavily and isn’t afraid to declare bankruptcy that survives and goes on to prosper.

When the labour market is highly mobile it’s not those who stick dutifully to their task that succeed, it’s people who are always ready to try something new that looks more promising.

In a society that is being continuously transformed by market forces, traditional values are dysfunctional and anyone who tries to live by them risks ending up on the scrapheap.

Looking to a future in which the market permeates every corner of life, Marx wrote in The Communist Manifesto: “Everything that is solid melts into air”. For someone living in early Victorian England – the Manifesto was published in 1848 – it was an astonishingly far-seeing observation.

At the time nothing seemed more solid than the society on the margins of which Marx lived. A century and a half later we find ourselves in the world he anticipated, where everyone’s life is experimental and provisional, and sudden ruin can happen at any time.

A tiny few have accumulated vast wealth but even that has an evanescent, almost ghostly quality. In Victorian times the seriously rich could afford to relax provided they were conservative in how they invested their money. When the heroes of Dickens’ novels finally come into their inheritance, they do nothing forever after.

Today there is no haven of security. The gyrations of the market are such that no-one can know what will have value even a few years ahead.

This state of perpetual unrest is the permanent revolution of capitalism and I think it’s going to be with us in any future that’s realistically imaginable. We’re only part of the way through a financial crisis that will turn many more things upside down.

Currencies and governments are likely to go under, along with parts of the financial system we believed had been made safe. The risks that threatened to freeze the world economy only three years ago haven’t been dealt with. They’ve simply been shifted to states.

Whatever politicians may tell us about the need to curb the deficit, debts on the scale that have been run up can’t be repaid. Almost certainly they will be inflated away – a process that is bound to be painful and impoverishing for many.

The result can only be further upheaval, on an even bigger scale. But it won’t be the end of the world, or even of capitalism. Whatever happens, we’re still going to have to learn to live with the mercurial energy that the market has released.

Capitalism has led to a revolution but not the one that Marx expected. The fiery German thinker hated the bourgeois life and looked to communism to destroy it. And just as he predicted, the bourgeois world has been destroyed.

But it wasn’t communism that did the deed. It’s capitalism that has killed off the bourgeoisie.