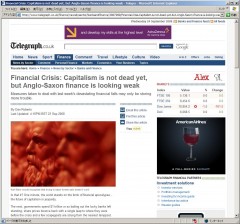 Financial Crisis: Capitalism is not dead yet, but Anglo-Saxon finance is looking weak – Telegraph.co.uk

Financial Crisis: Capitalism is not dead yet, but Anglo-Saxon finance is looking weak

Measures taken to deal with last week's devastating financial falls may only be storing more trouble.
By Dan Roberts

Is that it? One minute, the world stands on the brink of financial apocalypse – the future of capitalism in jeopardy.

The next, governments spend $1 trillion or so bailing out the lucky banks left standing; share prices bounce back with a single leap to where they were before the crisis and a few scapegoats are strung from the nearest lamppost. Dogs bark, the caravan moves on.

There are plenty who wish it so. In America, the official explanation for the events of the last seven days is that the crisis was a localised problem with the US housing market. Banks got into trouble because they were unable to trade the bad mortgages that had accumulated during the property slowdown.

By placing all this debt to one side in a government-funded "bad bank", the obstruction is removed and the wheels of finance can turn again. To the extent there was anything wrong with the rest of the engine of commerce, some regulatory tweaks are all that is necessary.

Hank Paulson, the US Treasury secretary who was the architect of Friday's rescue plan, described the financial and regulatory system simply as "suboptimal, duplicative and out-of-date".

In the UK, the agreed script differs only in the prominence given to the scapegoats. Following the government-orchestrated rescue of Britain's biggest mortgage lender, HBOS, regulators moved quickly to stamp out the practice of short-selling: whereby hedge funds and other speculators make money betting that a company will go down and in doing so contribute to it going down. The message behind the ban was that otherwise solid institutions like HBOS were being brought to their knees by hedge funds.

Others believe there is much more to the story than a temporary bout of madness brought on by a few American mortgage defaults. Events have moved at such giddying speed over the last week that it has been hard even for market professionals to make sense of what was really behind the chaos.

But the ease with which the world's most powerful institutions were brought to the precipice suggests something deeper is to blame: "The banks fell over like fat Labradors running over a wet kitchen floor," as one hedge fund manager put it. Worse still, governments were powerless to stop the crisis spriralling out of control – right up to the point of suspending all the normal rules of the free market.

The original strategy had been to erect a series of firebreaks to protect healthy institutions from the contagion around them. Though Northern Rock provided a domestic foretaste one year ago, the first of the really big firebreaks came in March when New York investment bank Bear Sterns was rescued with the help of $30bn from the US Federal Reserve.

Next, US mortgage giants Fannie Mae and Freddie Mac had to be rescued two weeks ago with a further $100bn nationalisation. A week later, Lehman Brothers was left to burn in the hope of blowing the fire out.

Then events really sped up. In the panic, Merrill Lynch and HBOS – two of the biggest names in finance – had to be sold to whoever would take them. Another $85bn firebreak was hastily erected to protect AIG, the world's largest insurer, but it was too late: the inferno was raging right in the heart of the global financial system. Morgan Stanley, Goldman Sachs and, with them, every bank in the western world, felt the flames at their feet.

Cynics will argue that Mr Paulson, a former chief executive of Goldman Sachs, concocted Friday's $800bn housing nationalisation to save his alma mater: in reality he had little alternative but to dynamite the capitalist edifice to save not just Wall Street, but the American way of life.

The fear was, and is, that a crisis so analogous to the Great Crash of 1929 could easily herald a repeat of the Great Depression of the 1930s. Then, the desire to punish banks and return to balanced budgets exacerbated the pain – encouraging protectionism, autarky and fascism.

This time, central banks have heeded the advice of 19th century British writer Walter Bagehot, the father of modern central banking, who said it was the responsibility of governments to step in when things got really bad and restore confidence. "Lend freely, boldly, and so that the public may feel you mean to go on," he wrote. Bagehot even predicted how ineffectual the firebreak approach might be: "To lend a great deal, and yet not give the public confidence that you will lend sufficiently and effectually, is the worst of all policies."

Still, Mr Paulson may be forgiven for wobbling. At the back of his mind will also be the knowledge that this approach can merely store up even bigger problems for the future. Many blame the recent debt bubble on Alan Greenspan, the former US central banker, who cut interest rates aggressively to save the world economy after the dotcom bubble burst in 2001.

Indeed, that bubble was blamed on Mr Greenspan's generous response to the Asian financial crisis and Russian default of the 1990s. The seeds of each successively larger financial crisis have arguably been sown by those who tried to minimise the pain of the last crisis: a cycle more accurately predicted by Karl Marx than Walter Bagehot.

Capitalism may not yet be destroying itself, but Anglo-Saxon finance is looking as weak as it has been for decades. What makes this far more than a bad debt problem is the inability of banks to work out their exposure due to the increased complexity of modern finance. AIG was so toxic to stability because it offered insurance on whether other companies would go bust. These credit default swaps were then sold on to other investors, making it all but impossible to establish where the buck stopped. It is for this reason that many financiers worry whether their world will ever recover from last week's trip to hell.

The vast majority of the growth in investment banking has come from these very derivative products that are now seen as too toxic to trade. Throw in the devastating effect that the ban on short-selling will have on the hedge fund community and you have the recipe for job losses in the hundreds of thousands. The City and Wall Street may never look the same again.

Such doom and gloom might look overdone after a Friday when shares rose at their fastest ever rate, but it is hard to avoid the feeling that last week marked a shift in power away from the established financial centres and toward the emerging economic giants of the East. Though Russia went through its own crisis, China was remarkably unscathed.

The biggest irony is that just as the US Treasury is now standing behind the US banking system as the lender of last resort, the Chinese government stands behind the US Treasury as its lender of last resort. Were the Chinese to stop recycling their giant trade surplus by buying up US government debt, the resulting panic could make last week's crisis look like a storm in a teacup.

Given how bleak the picture still looks for the US and UK, the sight of bankers receiving billions of dollars of public support is unlikely to go down well with voters. With an election looming in America and a febrile political climate here, it is likely that politicians will extract a terrible price in return for their largesse – not just in the form of more regulation but in a direct challenge to the turbo-capitalism practised by the investment banks.

Those with experience of both political and business worlds understand this challenge all too clearly. "Our financial system cannot continue to stand this game of speculators preying on the weakest firms – and trying to destroy them for profit," said New York mayor Michael Bloomberg. "There will always be a weakest firm and we have to under-stand that our country's future is connected to our ability to work together instead of trying to tear each other down."